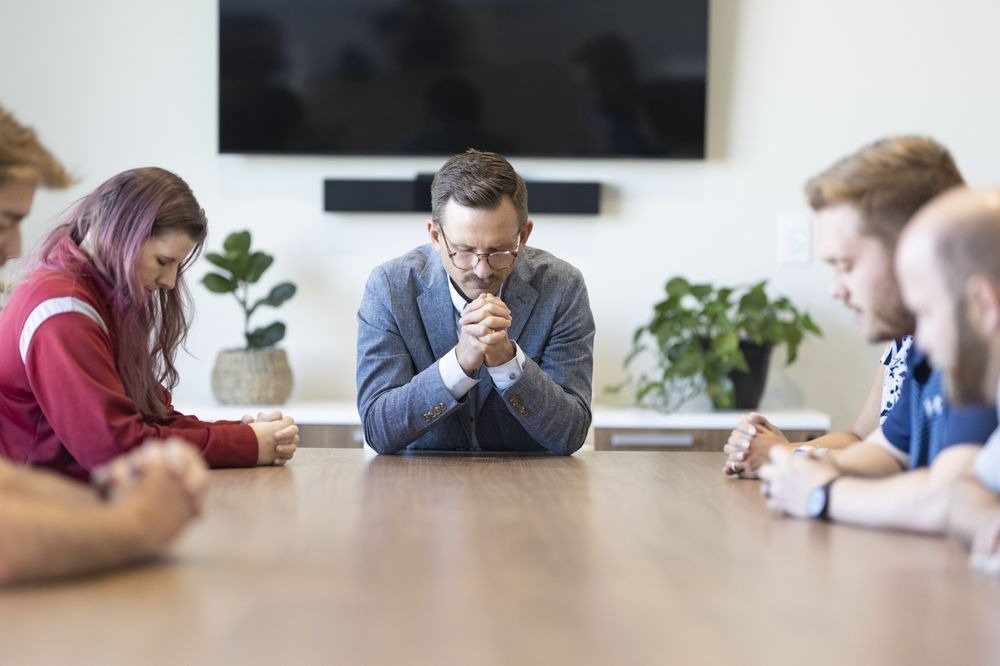 What Would Jesus Buy: Inspire Charts Course for $2 Billion Fund

It’s a good day on Wall Street, high temple of Mammon, when Robert Netzly proclaims the power of God.

At 4 p.m. New York time, 2 p.m. here in Idaho, Netzly takes a break after the market close, gathers his analysts and sales reps and turns to the Book of Romans. He’s been praying on a question you never hear on the Street: What would Jesus buy?

Netzly has his list: 24,000-or-so stocks that do and don’t conform to his reading of the Bible. A hard no: Amazon.com Inc. Never mind that its stock has appreciated 845% in 10 years. Amazon supports LBGTQ rights and, post-Roe, is covering employees’ travel expenses for abortions—decisions that Netzly, an evangelical Christian whose firm oversees about $2 billion, says disqualify a company from “God’s portfolios.”

Lloyd Blankfein, the former boss of Goldman Sachs Group Inc., once joked that he was doing God’s work. Netzly, a former Wells Fargo wealth adviser, insists he really is doing it. He wants corporate America to answer to a higher CEO, and he’s picking stocks such as gunmaker Sturm Ruger & Co., discount retailer Dollar Tree Inc. and Rupert Murdoch’s Fox Corp. to hasten the day.

Here in Boise—a fast-growing city of Brooklyn-esque lattes and out-of-state transplants grafted upon deep-red America—Netzly is positioning himself as an evangelical answer to big money. His idea is that the US is so riven by politics, culture, faith and more that even the stock market can tear us apart. Netzly’s small firm, Inspire Investing—which follows a strategy that he calls biblically responsible—is part of something larger: a Republican backlash to the trillions of dollars committed to environmental, social and governance investing.

When one thinks about the role corporations play in American life, solving society’s problems probably isn’t the first thing that springs to mind. Many would argue that companies aren’t doing nearly enough, particularly given our overheating planet (Netzly said he cares about the environment but isn’t especially worried about climate change). And yet, prominent figures on the right paint ESG as a threat to the nation.

Former US Vice President Mike Pence and Florida Governor Ron DeSantis insist corporate elites are foisting liberal agendas on everyone else—a claim that resonates with the millions of White evangelicals who embraced Donald Trump as president and remain a potent force in US politics. Looming large are hardening positions on race, diversity and reproductive rights.

Enter Inspire Investing. Netzly’s seven-year-old firm oversees exchange-traded funds with tickers such as BIBL, BLES, GLRY and WWJD, short for “What Would Jesus Do?” This year, his biggest ETF, Inspire 100 (ticker BIBL), is posting wider losses than the S&P 500.

Until recently, Netzly was marketing a Christian, conservative version of ESG. Now, with Republicans trashing ESG as “woke capitalism,” Netzly has stripped the label from his products. He said “hard-left liberal activists” and “Marxists” have “weaponized” the whole idea of investing with a broader purpose.

Where Netzly sees providence, others see prejudice. He dreams of a day when all corporations will hew to his evangelical reading of the Bible. He’s aligned himself with Alliance Defending Freedom, an influential conservative Christian group that’s fought to limit the separation of church and state and to roll back laws on same-sex marriage and reproductive rights.

“I love my LBGTQ brothers and sisters, I don’t want them to be discriminated against,” said the 41-year-old Netzly. “But I don't want companies promoting their ‘lifestyles.’”

Nearly all of corporate America disagrees, according to Bill George, an executive fellow at Harvard Business School. “Companies represent all employees, and LGBTQ employees are integral to the work force,’’ he said. Almost three quarters of Americans say they support legal same-sex marriage, according to a May poll conducted by Gallup.

At Inspire’s office, 15 minutes west of downtown Boise, the walls are still bare and some rooms are unfurnished. Business has been so brisk that Netzly expanded recently. The vibe is Finance Mod: white walls, white furniture, ping-pong table, cornhole boards. On days when buy orders top sell orders, employees ring a bell on the wall.

How Netzly ended up here still surprises him. He grew up in Salinas, about two hours southeast of San Francisco, and said he found Jesus at age seven. It wasn’t until he was working for Wells Fargo & Co., in tony Carmel-by-the-Sea, where the actor Clint Eastwood used to be mayor, that he found his calling as a Christian investor. Netzly said he was horrified to discover he owned shares in companies that were making what he considered abortifacients.

“I couldn't do my job,” Netzly recalled. “If somebody came to my desk and asked me to place a trade, I couldn't do it with a clean conscience.”

So, he quit in 2011 and began advising people about investing in accordance with his evangelical beliefs. Two years ago, he moved to Idaho, where the cost of living is cheaper, taxes are lower and Republicans outnumber Democrats 4:1.

On this August afternoon, he’s dressed in cropped beige trousers, a blue gingham shirt and flip-flops. He recently returned from Georgia, where he was strategizing with Republican politicos about their war on ESG.

Mixing faith and finance can get tricky. But in some ways, religion-oriented investing isn’t so different from ESG. The idea dates back to at least the 1700s, when the Quakers forbade their members from owning slaves. Today, a range of faith-driven investment firms—mostly Christian, but Islamic and Jewish too—form an influential fringe industry.

“They are a niche within a niche,” said Todd Rosenbluth, head of research at VettaFi, an ETF data and analytics company. In all, the faith-based firms oversee $139 billion under the broad umbrella of sustainable investments. That’s a tiny fraction of the $2.5 trillion of assets in this category industrywide.

Which companies qualify for “God’s portfolios” at Inspire? The lines can get blurry. Inspire screens companies by a variety of categories under the “E,” “S” and “G” of ESG. But it’s the S—social—where things get particularly contentious for Netzly.

“The Pollyanna in me wishes that there could be a two-party ESG system,’’ Netzly said.

Read more: The Anti-ESG Crusader Who Wants to Pick a Fight With BlackRock

Inspire views supporting LGBTQ rights, covering travel for reproductive health, stem cell research and in vitro fertilization as big negatives. So, too, selling alcohol, cannabis, tobacco, gambling and distributing pornography. It endorses companies it deems worthy, engages with those it hopes to convert and excludes or divests from ones that it finds “immoral.”

The result: a list of companies that—while not necessarily declared “blessed”—generally square with Netzly’s beliefs. As with many things in ESG, the lineup can seem confusing.

Defense contractors such as General Dynamics Corp., manufacturer of M1 Abrams tanks and Stinger missiles, are out. But firearms companies like Sturm Ruger, maker of the 9 millimeter Ruger American semiautomatic, are in. Other holdings range from Ferrari NV to Schlumberger NV, plus Dollar Tree and Fox Corp., parent of Fox News.

Inspire recently singled out the 125-year-old J.M. Smucker Co., best known for its jams and peanut butter, for “choosing LGBTQ+ political activism over wholesome family values.” On his website, Netzly urges investors to “push back” with an online petition to Chief Executive Officer Mark Smucker.

Smucker spokesman Frank Cirillo said the company has expressed support for legislation that includes LGBTQ civil rights protections. “We are committed to ensuring equitable rights for our employees, their families and those in the communities we serve,” he said.

Currently, that list includes almost 50 companies, from Accenture Plc to Zillow Group Inc. At one of them, Dick’s Sporting Goods Inc., Netzly said he may put the issue to a shareholder vote. A company spokesman hasn’t responded to emails seeking comment.

In this fight, Netzly has teamed up with ADF, the conservative legal group, on a “viewpoint diversity” index. The measure supposedly scores companies on how they “respect” freedom of expression and religion.

Netzly urges all investors to heed 1 Corinthians 10:31: Whatever you do, do all to the glory of God. But, so far, his investment performance has been mixed. His largest ETF, Inspire 100 (ticker BIBL) has returned an annualized 8.9% since it opened in 2017, compared with 10.7% for the S&P 500 Index during the same period, with most of the underperformance occurring this year. The Inspire International ETF (WWJD) gained at annual rate of 5% since the start of 2019, exceeding the 1.6% advance of the MSCI ACWI Excluding US Index.

In Netzly’s telling, there are huge sums of money at stake. He said Christians in the US have about $20 trillion of investments, savings and retirement accounts.

A few months ago, phones began lighting up at Inspire. Elon Musk, the world’s richest person, was attacking ESG as “the devil incarnate.” DeSantis, the Florida governor and White House hopeful, was piling on. Fox News firebrand Tucker Carlson, along with right-wing radio host Glenn Beck, were blaming ESG for everything from high gasoline prices to economic trouble in Sri Lanka.

If ESG was so bad, Inspire clients wanted to know why was Netzly wrapping himself in label? His answer: “I’m not anymore.” He formally renounced the tag and rallied behind the so-called anti-woke campaign.

In a blog post, he struck a different tone. “The burning intolerance of the left has hit a gas line in the ESG party hall, escalating the flames to such heights that it has become necessary for us to abandon the building,” Netzly said on Aug. 18.

As they do most Thursdays, Netzly and his family head to a weekly potluck-dinner-cum-Bible-study at a friend’s place. As the kids play outside, the adults discuss Colossians 3 over burritos. Part of the passage is often interpreted as urging people to focus on spiritual matters rather than earthly ones. Few here realize Netzly oversees billions of dollars—or that he’s part of a conservative movement tilting at corporate America.

Netzly demurs when describing what he does as “stakeholder capitalism.” That’s the label prominent executives have adopted when talking about corporations’ broader social purpose. Like ESG, the phrase has been maligned by conservatives.

“It’s a loaded term,” Netzly said of the phrase. He prefers a different one: Companies, he said, should be a “blessing” to everyone.