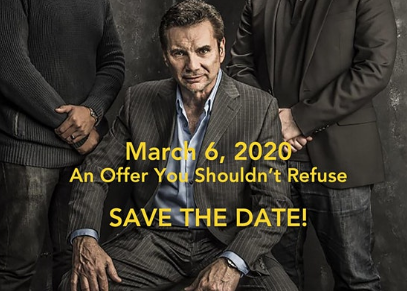 Featured speaker will be Michael Franzese grew up the son of a notorious underboss in New York’s violent and feared Colombo crime family. At 24 he was a fully initiated member of La Cosa Nostra. Within 10 years, he was generating between $5 and $8 million per week and was considered one of the biggest organized crime money earners since Al Capone. It was a life filled with power, luxury, and violence. All that would change when Michael met a beautiful dancer from California who would turn his world upside down and cause Michael to do the unthinkable - walk away from The Mob. Nobody of his rank had ever just walked away - and lived.

This event is funded by private and corporate donations so without your support this event would not be possible. Since all 250+ invited government and elected attendees are provided complimentary admission and parking your participation is vital.

As a sponsor of the event, we are pleased to acknowledge you and/or your business in the event program. This event is a legitimate 501c3 and all sponsorships are tax deductible.

On behalf of our government and community leaders, CBMC and the GLPB Team - THANK YOU!